IMPORTANT UPDATE: Added performance of ALL IS CALM on Sunday 12/15 at 4:30 pm at The Playhouse at Overture

ALL IS CALM: The Christmas Truce of 1914

“A beautiful musical recounting of a World War I cease-fire of gifts, poetry, and melody." – The New York Times

ALL IS CALM, takes place on the Western Front, Christmas, 1914. A German soldier steps into No Man’s Land singing “Stille Nacht.” Thus begins an extraordinary night of camaraderie, music, and peace. A remarkable true story, told in the words and songs of the men who lived it. Tickets (starting at $20) available at Overture Center Box Office in person, online, or by phone at (608) 258-4141.

Written and conceived by Peter Rothstein, graduate of the UW-Madison Department of Theatre & Drama and Co-founder and Artistic Director of Theatre Latté Da, this highly original work features a cappella choral arrangements by Erick Lichte and Timothy C. Takach. The show premiered at Theatre Latté in Minneapolis, MN in 2007, toured North America with Cantus Vocal Ensemble for several years, and ran off Broadway November-December 2018.  More on that here.

During the holiday season, there are lots of fantastic arts events at the Overture Center, and that can make parking and ticketing a challenge for theater patrons.  We encourage you to come downtown early, pick up your tickets from WILL CALL (open two hours before each show), and then grab a bite to eat or enjoy a pre-show beverage.  Avoid the crush and plan a little extra time for parking and picking up will-call tickets.

With a little extra care, you'll arrive at the theater with time to spare, and ready to enjoy our production of ALL IS CALM: The Christmas Truce of 1914.

“This show combines exquisite music with a deeper message about what makes us human, and what makes Christmas so powerful,” adds Swiggum. “And the fact that it’s a true story, told through the voices of the men who were there, means…well, no one will forget this show.”

“For a long time I thought that it would make such a great piece of music theater if I could find the right way to tell it,” said Rothstein, who got a masters degree in directing from UW-Madison in 1992, and six years later co-founded his own theater company in Minneapolis called Theater Latté Da, where he still serves as artistic director.

"O Tannenbaum" from ALL IS CALM

Enjoy "O Tannebaum" as sung by the cast of ALL IS CALM.

Trevor J. Bass (Baritone) is happy to be returning to the FST stage. Past FST credits include Matt in The Fantasticks and Caleb in The Spitfire Grill.  He’s also been seen onstage at Middleton Players Theatre.  Favorite roles there include Leo in Parade,Tateh in Ragtime, and the Cat in the Hat in Seussical.  Trevor would like to thank his family for their ongoing support, most notably his lovely wife, Mari.  Enjoy the show!

Michael Brunner (Tenor) is thrilled to be appearing again with Four Seasons Theatre! He was previously seen on the FST stage in A Little Night Music(Carl Magnus) and South Pacific (The Professor).  He also enjoys being a part of FST’s outreach team singing programs throughout the year at retirement communities and libraries across Dane County.

Michael Chiaverini (Baritone) is thrilled to debut with Four Seasons Theatre in this wonderful, inspiring show! He is a junior at Middleton High School, where he is active in MHS Theatre, Chamber Choir, and Jazz Orchestra (vocalist and tenor sax).  Recent favorite roles include Will Bloom (Big Fish), Richard Hannay (The 39 Steps), and Oberon (A Midsummer Night’s Dream). He sincerely thanks his family, friends, and teachers for their continuous support.

Keith Christianson (Bass), a sometime veteran of Madison area theater, is best known for his one man show "Green Eggs and Ham" performed between five and seven nights a week at the exclusive Bedtime Theatre for an audience of one.  The show is entering its fourth season and neither attendance nor popularity have waned despite the long run.

Elijah Edwards (Bass), a freshman at James Madison Memorial High School, is proud to be joining the cast of All is Calm. El ijah appeared in Four Seasons’ productions of The Little Mermaid and 1776 and played Young Will in the Theatre LILA/Four Seasons’ production of Big Fish.  He enjoys running cross country, playing the trombone, reading, and writing.  Elijah would like to thank Four Seasons for the opportunity and his family for their continued support.

Tim Emery (Tenor) is excited to be joining Four Seasons Theatre for another wonderful show! He graduated from UW-Madison in 2018 with a degree in Music Education and is currently the 6-12 grade choral director for the Columbus School District. Recent productions he was involved with include The Kurt Weill Cabaret with University Opera and Man of La Mancha with Four Seasons Theatre. He would like to thank his family, friends, and his students for constantly inspiring and supporting him!

Ben Galvin (Bass), a junior at the University of Wisconsin-Madison, is studying vocal performance, under Professor Jim Doing, and creative writing. His interest in music began in high school while playing roles in The Sound of Music and Hello, Dolly!  He was part of the cast of Four Seasons Theatre’s The Little Mermaid this past summer.  Roles with University Opera include Seneca in Monteverdi’s Poppea and Snug in Britten’s A Midsummer Night’s Dream.

Dan Jajewski (Baritone) is excited to be performing with FST again!  Most recently with FST, Dan played Scuttle in their production of The Little Mermaid. Other credits include: Parade (J.N. Starnes, U/S Leo Frank), Beauty and the Beast (Gaston), Sweeney Todd (Anthony), Falsettos (Mendel), Ragtime (Younger Brother), Shrek the Musical (Shrek), and RENT (Mark).  Dan would like to thank his fiancé Kate and his mother Pam for always supporting him.  Keep the arts alive!

Tyler Stone (Tenor) is excited to return to Four Seasons Theatre for the touching story of All Is Calm. Previous productions include Madison Opera’s La Traviata (Ensemble), StageQ Productions’ Dog Sees God: Confessions of a Teenage Blockhead (Beethoven), Middleton Players Theatre’s Beauty and the Beast (Ensemble), and St. Bernard’s Players’ Jesus Christ Superstar (Simon/Jesus US). He would like to thank his family and friends for their continual support and patience.

Sam Taylor (Baritone) is thrilled to be returning to Four Seasons Theatre for this unique project.  He recently earned his Bachelor of Arts in Psychology and Music at Lawrence University in Appleton, WI.  Previous credits include Matilda the Musical (Rudolpho/Ensemble), Pippin (Pippin), Spamalot (Prince Herbert et. al), and Urinetown (Bobby Strong).  He is incredibly grateful for his family, friends, and the long line of mentors and teachers for their support and care.

ALL IS CALM: The Christmas Truce of 1914 was created by Theatre Latte Da in Minneapolis, MN. Learn about that production and access their extensive study guide.

Listen to the NPR feature "A Century Ago, When the Guns Fell Silent On Christmas" and learn more about the Christmas Truce of 1914. 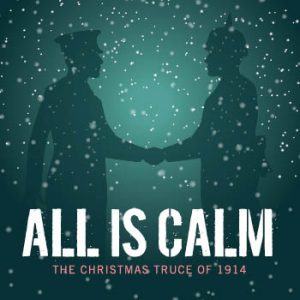 Purchase
ALL IS CALM Tickets